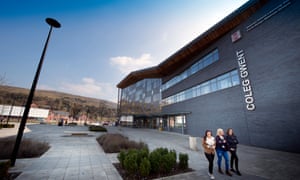 The plaza in front of the Blaenau Gwent Learning Zone was buzzing with life. A pack of teenage boys was pinging a rugby ball around, while groups of girls chatted before heading off for lessons, lectures or practicals. Those taking an early lunch were strolling towards the funicular railway, which zooms passengers up from the gleaming new college of further education on the valley floor to Ebbw Vale town centre.

“There is a feeling of optimism here,” said Richard Crook, corporate director of environment and regeneration in Blaenau Gwent. “More people are staying in education, more people are getting good qualifications and the quality jobs for them are here or on the way.”

The college’s setting could hardly be more symbolic. The huge flat site used to house the sprawling Ebbw Vale steelworks which, half a century ago, employed more than 10,000 people. The works closed in 2002 and the site is being redeveloped.

“For years here, people have been kicked and had the confidence knocked out of them,” said Crook, who has an office in the old steelworks headquarters, a red-brick building with grand staircases that would not look out of place in a stately home. “Things are now looking up again.”

Things do seem to be looking up across south Wales. Last week Aston Martin announced that its recruitment drive, for the first 750 workers who will build its new DBX crossover model at St Athan in the Vale of Glamorgan, would take place at the end of this month.

Perhaps even more pertinently for those teenagers taking engineering courses at the Learning Zone, another sports car marque, TVR, said that it would make its new model in Ebbw Vale. TVR has been tempted in, not only by the bright apprentices Blaenau Gwent is promising but by the plans to build the Circuit of Wales – a £315m project comprising a race track plus an automotive business hub and a tourist complex – in the hills above the town. A start date for construction and details of financial backing is imminent.

It is not surprising that the first minister of Wales, Carwyn Jones, was in chipper mood when he made a keynote speech on the Welsh economy, which will be a vital issue ahead of this May’s assembly elections.

Jones, of course, drew attention to the Aston Martin and TVR announcements. He claimed Wales was once again making things – from mini-computers in Bridgend to armoured vehicles in the Merthyr Tydfil, up the road from Ebbw Vale, andaircraft wings in north Wales. “Don’t let anyone tell you we don’t make things any more here in Wales,” he said.

Jones cited the “fast reaction” of Wales’s inward investment team and what he called the “hugely supportive environment” his Labour-led administration had built.

It wasn’t only manufacturing – a traditional Welsh strength – that was on the up, according to the first minister. Jones claimed Wales had become a “creative powerhouse”, making TV shows such as Dr Who and Sherlock, with Sky and Amazon productions also on the way.

Jones claimed that despite swingeing cuts in the funds Wales receives from central government, it continued to build roads and improve railways. It was also committed to delivering an M4 relief road in south Wales to deal with a bottle-neck around Newport.

There were other announcements last week in addition to those from Aston Martin and TVR. A new £31m computer science facility is to be built in Swansea, partly with European Regional Development Fund money. And games developer Relentless Software, one of the companies behind the hugely popular video gameBuzz!, is to open a new studio in Wales creating new jobs.

But it is not all good news. Try telling the steelworkers in Port Talbot that Wales is booming. Around 750 jobs are expected to go there and doubts linger over the long-term viability of the site.

Adam Price, the former Plaid Cymru MP who is now standing in the assembly election, said he was worried about the “rosy” picture the Welsh government was painting. Price said successes such as the arrivals of Aston Martin and TVR should be celebrated but their importance should not be exaggerated.

“If we can turn TVR and Aston Martin into the makings of an automotive cluster, great. The Circuit of Wales, fantastic. It’s not all darkness, there are points of light. But there are problems – and you’re not going to solve them if you deny they exist,” he said. He added that devolution had not turned around the economy, which was on its knees following the loss of heavy industry in the 1980s and 1990s, as had been hoped.

In his speech, the first minister said that since devolution in 1999, Wales had grown faster than most English regions on the gross value added (GVA) per head measure. Price countered by saying that regional GVA per capita in Wales was 72% of the UK average in 1999, when the first Welsh assembly elections were held. By 2014, the latest year for which figures are available, it had fallen to 71.4%. “That’s a devolution dividend of -0.6%,” he said.

Brian Morgan, professor of entrepreneurship at Cardiff Metropolitan University, also raised his eyebrows at the first minister’s upbeat messages. He was heartened by the TVR announcement but, like Price, suggested that the eye-catching announcements hid a darker picture.

Morgan believes the government was wrong to abolish the Welsh Development Agency, torched in the Welsh “bonfire of the quangos” a decade ago. “Taking that agency work within the civil service was a big mistake. There’s no accountability, no business plan. Inside the civil service it’s all kept close to their chests.”

Morgan’s stance on the WDA is not surprising – he was former chief economist there – but his views chime with many. “If we’re doing well, how come we’re the poorest nation in the UK?”

Back in Ebbw Vale, away from the Learning Zone campus, it is easy to find people as sceptical as Price and Morgan.

David and Matt, two jobless middle-aged men, were sitting on steps in the Bank Square, a public space dominated by a prancing 4 metre high stainless steel dragon created by local blacksmiths to represent the heart of a fiery furnace.

“The government, the council, the business bosses have all these great plans and schemes,” said David, who has not worked for four years. “They tell us there are going to be new jobs but it’s all bullshit. Look at this square. They spend millions on refurbishment here. But what does it amount to? A place for people with no jobs to sit in.”

The employment figures show there is a way to go. According to the latest ONS figures, 4% of those aged 16-64 in Blaenau Gwent were claiming jobseeker’s allowance – double the figure for the whole of Wales. Some 12% were claiming incapacity benefit or the employment and support allowance, compared with 8% for Wales and 6% for the UK.

The quality jobs are not here yet in great numbers. Average gross weekly pay is £403 – £130 short of the UK figure. Fourteen per cent of people have no qualifications, against 10% for Wales as a whole and 9% for the UK.

“When there are jobs, they go to the Poles,” said Matt. “They promise jobs for us here but then they give them to outsiders. It’s just not fair.” Which is partly why the established political parties have a new kid on the block to contend with this election. Ukip is targeting valleys communities like this and polls have suggested it could win around nine seats, which would fundamentally change the make-up of the 60-seat assembly.

Russ Annett, 88, who worked in the steelworks from 1943 to 1999, stopped to chat. He didn’t romanticise the place. “It was hard work, no doubt about that.” And he fears the eye problems he suffers stem from his time there. “But it meant the town was buzzing. It feels like a ghost town now.”

Hairdresser Rebecca Miller was more cheerful. “Business is OK at the moment,” she said. “It’s got to be good for the area that people like TVR are coming in. You worry that they will bring in people from other areas who already have the skills, rather than employing local people. But I think it’s giving the community a bit of hope.”

Like Miller, Jemma Jones, who works in a convenience store, was not convinced those TVR and Circuit of Wales jobs will go to local people – but for another reason. “Too many people have what I call ‘lazy-itis’. They don’t want the work. They get paid too much not to work.”

Councillor Graham Bartlett, who holds the economy and regeneration brief on Blaenau Gwent county borough council, is convinced Ebbw Vale can thrive again – but can also understand the scepticism.

“There’s been a history of closure and rundown in this area. I worked in the mining industry. I remember being told I would have a job until [the age of] 65. Six months later, the colliery closed. Thousands of people lost their livelihoods here. It’s been a long recovery since then and so it’s not surprising there is a lack of confidence. We’ve had a lot of knocks.”

At the moment, it is a wilderness. On the lower parts, you have to tread carefully to avoid losing a boot in the oozing bog; higher up, you have to look out for adders which like to bask on the rocky outcrops.

If all goes to plan, within a few years this 830-acre site on the edge of the Brecon Beacons national park and just north of Ebbw Vale will be transformed into theCircuit of Wales, a £315m project to create a racetrack, centre of automotive excellence, hotels and a campsite. The ooze, adders and quiet will be gone, replaced by high-powered motorbikes, cars and motorsport fans.

The Heads of the Valleys Development Company, which is behind the scheme, claims it will be the “most significant capital investment programme” in automotive and motor-sport infrastructure in the UK in the past 50 years. It says it will create thousands of jobs and help revive the fortunes of the south Wales valleys.

Martin Whitaker, who has managed Bahrain International Circuit and has also worked for the sport’s governing body, the Fédération Internationale de l’Automobile, has been appointed chief executive of the circuit. Details of how the project will be financed and a start-date are expected soon.

Preliminary work is already under way. Last week, ecologists were cutting back grass and collecting adders and common lizards so they could be moved to safer ground; archaeologists were digging at the site of bronze age cairns.

Not all are happy. Open-space campaigners are furious the Welsh government has sanctioned the de-registration of the site as common land. The Gwent Wildlife Trust says the site is a mixture of rich acid grassland, heathland and bog, with a stream network throughout, and was home to a “wealth of wildlife”, including rare dragonflies and birds including the hen harrier and grasshopper warbler.

Ian Rappel, chief executive of the trust, said the sense of “moorland tranquillity” would also be lost forever. “The developers have made much of the ‘bleakness’ of the mountain in their arguments for its transformation to a racetrack. But one person’s bleakness is another’s inspiration.”