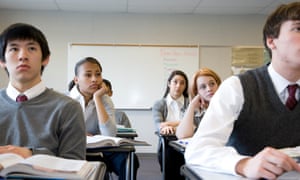 On a Saturday evening at the beginning of her senior year in high school in north-western Oregon, Lori Riddle started having trouble breathing. She was helping with a dance for freshman students, when her peripheral vision began to fade and she started shaking and crying.

“It was just the feeling of being around people, I felt trapped almost,” said Riddle, now 18 years old and headed to the University of Nevada. “I broke down and I ran outside.”

It was one of many panic attacks she would have during the school year.

With the help of her mom, she saw a counselor, but high school rules came with their own sets of challenges. Since excused absences were reserved for physical ailments or emergencies, on days when Riddle was feeling especially bad, her mom would have to lie about why she needed to miss school and say she was sick or cite a family emergency.

According to state law, Oregon students are allowed five days of excused absences within a three-month period, but unexcused absences can come with grade penalties and even loss of class credit.

Riddle said the secrecy made her feel awful, but it also meant her school wasn’t aware of what she was going through. It ultimately fell to her to alert teachers and staff about her anxiety, so she could get the support she needed in school.

“Just because I was able to do that, doesn’t mean that every other student can,” she said. “I know for me that was really hard, and a lot of students can’t even see that as imaginable.”

Now, after a months-long legislative push by students like Riddle, the situation is about to change.

Under a new law that will take effect this fall, students of all ages in Oregon will be able to be excused from school for a mental health reason, such as a panic attack or appointment with a psychologist, just as they would for a physical ailment.

The law is one of the first of its kind in the US. Last year, Utah made a similar change by updating the definition of a “valid excuse” for a student’s absence to include mental illness.

At a time when suicide is the second leading cause for death among 15-to-34-year-olds in Oregon, the law is not only meant to change the logistical rules for school absences, but also the very culture surrounding mental health, explained Cheri Helt, an Oregon Representative who carried the bill in the House.

“Hopefully it creates a culture where it’s acceptable to say, ‘Hey I’m struggling and I’m having a tough time,’ and then people will say, ‘Hey what can I do to help you, are you alright?’” she said.

The law does not offer any specific guidelines about what constitutes a mental or behavioral health issue. Helt said students may need a mental health day for a variety of reasons, so they didn’t want to label it. A legal guardian will likely still need to write a note or call the school, but it will be up to the student to decide when and why they need it.

The push for the legislation in Oregon began last summer, during a five-day leadership camp for local students, organized by the non-profit group Oregon Association of Student Councils. During a workshop on mental health, a group of high school students started discussing the importance of schools recognizing mental health issues as a legitimate reason for missing school.

With the help of representatives from Providence Health & Services, a non-profit Catholic health care system, many of these students started meeting by phone or in person, sometimes twice a month, to design a bill that would help solve this problem. By the beginning of 2019, the legislation had been introduced and gaining support.

But there has been some questions from state lawmakers and local community members about whether students will abuse the new policy by saying they need a mental health day when they just want to skip class. Oregon has one of the highest rates of absenteeism in the US, according to the Oregon Department of Education.

During a Senate education committee hearing on the bill in April, Derek Evans, then a senior at Sandy high school in northwestern Oregon who has helped lead the push for the legislation, acknowledged the potential for misuse was a challenge.

Ryan Dix, a psychologist at Providence Health & Services, said he would like to see the rest of the country follow Oregon’s example.

“There’s still a lot of people that really see mental illness as a moral flaw or as just kind of a weakness in character and if that’s really the perspective you take your willingness to talk with anyone about it or to get treatment is obviously going to be negatively impacted,” he said.

Sixteen-year-old Leina McLaughlin, an Oregon high school student who contributed to this legislative effort as well, said she struggled last year with stress and anxiety.

There were days when she needed time at home, but didn’t feel like she could take time off because of the absence policy. She will be a sophomore next year at Sherwood high school, in northwestern Oregon, and said she is relieved she’ll have this option.